The scheduler module allows you to launch scheduled jobs via shell commands or Data retrieval and manipulation methods.

For a quick start on how to use the scheduler module look at the Scheduler guide.

The scheduler module needs to be configure before it is used.

To use this module, you must follow the next steps:

If the Scheduler needs to work in a cluster or change any schedule config, we can overwrite properties of scheduler.properties file.

By allowing the clustering, the scheduler instances will use the configured datasource to synchronize the job execution between them.

Note: Never run clustering on separate machines, unless their clocks are synchronized using some form of time-sync service (daemon) that runs very regularly (the clocks must be within a second of each other).

The Quartz library needs some tables in order to work correctly depending on the configuration it is used.

To know more about the different kinf of jobStores to be used in the configuration, see the Quartz documentation.

The tables to be applied to the different kind of databases can be found by downloading quartz framework, under docs / dbTables folder.

This document gives a minimum base to start with the AWE Scheduler module, and explains how to automate and schedule tasks inside AWE in a simple way.

The Scheduler module is based on the Quartz Scheduler library.

All documentation related to the Quartz Scheduler library can be found on its web page.

A task consists on a job associated to a trigger that is executed by the Scheduler in the configured time / moment.

A task can also be concatenated with other tasks to create a workflow. This can be done by adding those other tasks as dependencies in the parent task configuration wizard.

There are two type of tasks that the scheduler can work with, the maintain tasks and the command tasks.

When creating a new task, a task creation wizard is used to personalize the task configuration.

The configuration wizard consists in 5 steps:

In this step we have to add the task basic configuration.

Note: To add a new maintain to the Scheduler, the maintain must be set to public="true".

This step allows to add the needed parameters to the maintain or command for its execution.

These parameters are loaded to the application context when the task is going to be executed. In this way, the task can get the parameters in the execution time.

Note: If the task launch type is Maintain, the needed parameters for the selected maintain will be automatically added to the task parameters screen.

In this step we will configure the launch type for the task.

We can choose from three different options:

The task will only be launched manually from the task list screen.

Note: For a task to be added as a dependency, the launch type must be set to Manual.

The task will be launched with a cron pattern based schedule.

See schedule prerequisites for more information about how to create schedules for a task.

With this launch type, the task will launch a check in the selected file/s with the configured schedule.

To know how to create a schedule for the task see schedule configuration guide.

The remaining fields are:

In this step we will configure which tasks have to be executed after the current task finishes.

Playing with these options, we can create a workflow.

The last step is to choose a report type.

The report will give information about the task when it finishes.

We can choose one of these four options:

Used when we don't want to retrieve any report from the task.

This could be compared to the silent-action in AWE.

This option will send an email with the task information, and it will also add the dependencies information if any.

Note: The email will also add basic information about the task itself and its dependencies.

This option will send a broadcast message with the given message to the selected users only.

This option will launch the selected maintain as a report.

Note: The task data will be added to the context in order to be available for the selected maintain, to get the data, it is recommended to use the TaskConstants interface variable names from the Scheduler package.

The existing tasks can be managed from the scheduler tasks screen, where we will have a list of the created tasks.

The list will show some basic information of each task, like the name, the launch type (icon), the last and next execution times, the task status and the execution average time.

When selecting one task, some options will be activated:

One of the main features of the scheduler, is the powerful tool that allows to create any kind of schedule in a simple way.

For this purpose, and with the simplicity in mind, the schedule creation has been separated into three main schedule options:

Schedules that are launched every X time. We can choose the time that has to pass between launches, and the time unit that is going to be used.

The repetitive schedule, as its name suggest, allows to create schedules that are launched every X time, where X is the time between one launch to the next one.

Depending on the time unit we choose, some other options will appear into the configuration screen to help the user to create a more advance schedule.

But first, the next fields are common for all the possible options.

^1: If the From criterion is empty, the task will be launched at the moment it's created.

^2: If the To criterion is empty, the task will be launched indefinitely until its configuration changes, or the task is removed.

Note: If one of the optional values inside the configuration is left empty, the default All value will be applied.

This kind of schedule will launch a task just once.

This schedule type launches a task only once, by creating a cron pattern with an specific date and time.

The available fields to create this kind of task are:

Note: At least one of the two criterions needs to be filled.

The custom schedule offers all the available fields that can be customized to create the cron pattern.

^1: If the From criterion is empty, the task will be launched at the moment it's created.

^2: If the To criterion is empty, the task will be launched indefinitely until its configuration changes, or the task is removed.

Another powerful feature of the Scheduler module is the possibility of adding dependencies to a task. The dependencies are tasks that will be launched just after the parent task finishes. These dependencies can also contain other dependencies, creating a workflow.

There are two main types of dependencies.

The synchronous dependencies are, as their name suggest, executed in a synchronous way, in a configurable order.

The synchronous dependencies are created by setting the Blocking=Yes option.

By setting blocking to yes mean that, in case that any of the dependencies ends with an error, it will cancel the entire synchronous execution stack.

To manage the stack, there is the Order criterion, which is used to set the order in which the synchronous dependencies are going to be executed.

The asynchronous dependencies are executed in bulk and their execution order can't be configured.

As the dependencies are executed in bulk, they are not blocking between them.

The difference between them is just that one is blocking whereas the other is not.

In order to add a task as a dependency, its launch type must be set to Manual. 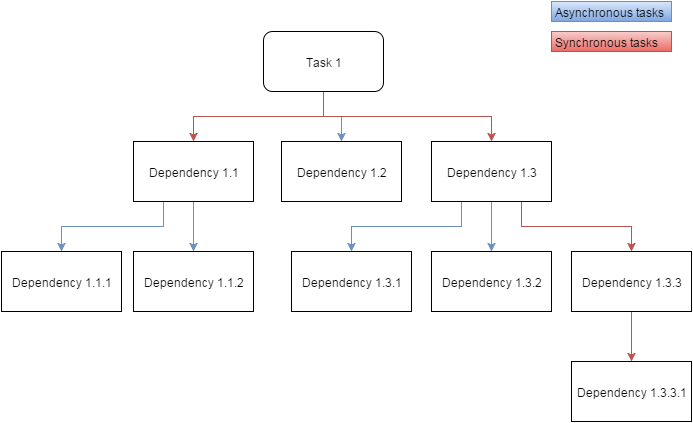 The next image shows an example on how to create a workflow using the scheduler dependencies concatenation.

The servers created for the Scheduler module are mainly used to execute tasks, and in tasks that needs to check if a file has changed.

The servers can be instantiated multiple times, and each instantiation can use its own user and password to connect to the server with the selected protocol.

When creating a new server, the next fields have to be filled.

Note: If a server is deactivated, the task using it won't even try to connect to it.

The scheduler server list will show a list of server with their basic information: name, server ip, connection protocol and status.

When selecting one of the servers from the list, some options will be enabled:

The task inside the scheduler can be modified to ignore some dates by using holiday calendars.

Those calendars contains the dates that have to be ignored by the scheduler in the task schedule.

Each of the tasks can only be associated with one calendar.

The first step is to create the calendar itself, which will have the next basic information.

Note: If the calendar status is set to Active = No the task will ignore the calendar, and it will be launch as if it wasn't associated with it.

Once the calendar is created, from the calendar configuration screen, we can add new dates by selecting the option edit on the top right side of the screen.

When we get to the edition screen we will have to fill the next fields for each date.

On the calendar list screen, when selecting one of them, the next options will be available: